I must, must, must plug a great film it took me way too long to just randomly stumble across…in the hope that I can spare you the unthinkable tragedy of never knowing it exists!!!  I will disclaimer this 2007 Russian film called, simply, 12 by granting that it was a little hard to watch, only because…even knowing a bit of Russian…the machine-gun dialogue made it hard to keep up with the subtitles.  But this deeply Russian tale, loosely based on the very American 12 Angry Men, is the most extraordinary film I’ve seen in years:  click here for imdb.com description.

Why IMDb, whose ratings I generally trust, only gave it a 7.7 is a complete mystery to me.  How it could possibly have failed to get the 2008 Oscar for Best Foreign Language Film boggles the mind.  The acting alone is…staggering.  Not only was it refreshing to see 12 very ordinary-looking men (no pretty-boy, pampered leading men here) all give such powerhouse performances, but I found myself staring in disbelief at times, like when near the end one, isolated from the rest of the group, contorts his face with grief in a way I didn’t even think was physically possible.  The cinematography, especially in capturing the back story of the accused, is magnificent.  But most of all it’s a profoundly nuanced story with truly extraordinary depth of soul and a vitally important message delivered without even a shred of self-righteousness. 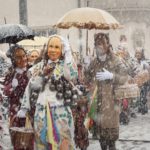